Northern Trust and Bloor Homes are delighted with the positive response from the people of Eccleston to the revised Carrington Centre redevelopment proposals. The latest design, following the successful appeal against Chorley Borough Council’s refusal of an earlier application, nincorporates a smaller supermarket while retaining independent retailers from the existing centre.

The need to appeal against the Council’s decision to refuse permission against planners’ advice caused delay in taking this project forward. This delay meant that the national retailers interested in a larger supermarket had revised their requirements and are now and in the foreseeable future only interested in a smaller store.

As the economy has worsened and requirements changed during the delay it is very positive that Northern Trust and Bloor Homes along with a nationally recognised food retailer are still able to commit to this multi million pound scheme that benefits the village and surrounding area by providing a modern retail offer securing the future of local traders.

To ensure viability for the retained shop tenants, to provide a continuously trading retail heart for the village that should be open for this Christmas and without creating a large area of derelict land, the number of houses has had to be increased from the 40 previously approved to 63. In recognition of the concerns of many villagers access to the whole development will be solely from The Green.

Villagers were invited to fill in a questionnaire on the new proposals and in answer 74% of the respondents stated they did support the plans with 24% saying they did not. The rest were undecided.

A spokesperson for Northern trust said: “The design layout and size of the retail scheme has been determined by our tenants and market requirements but has led to what we believe is a scheme wholly appropriate in scale for the village”.

Lisa Jackson, Post Office Manager in the village said “Personally I believe the proposals show a clean and modern design that will appeal not only to shoppers but also the 8 or so independent traders providing jobs and services for the benefit of the village, something that very few villages and even small towns can offer and we must not forget that it is they that are also investing tens of thousands of pounds of their own money into securing these facilities for the future”

In relation to the housing a spokesperson from Bloor Homes said: “This scheme has been drawn up to reflect the local demand for housing in this area and we look forward to working with the community and Local Authority through the planning process”. 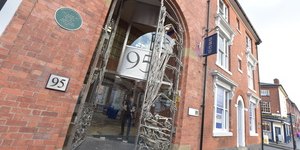